Considered mute and legally blind until age 5, Audre Lorde began reciting poems to express herself. She published her first poem at 17, went on to win numerous distinguished honors and became a major voice in 20th-century poetry, civil rights and feminism.

A self-declared “black, lesbian, mother, warrior, poet,” Audre translated her lifelong feeling of being an outsider into powerful poems + essays on the complexities of oppression. Before losing a long battle with cancer in 1992, Audre published 17 books. Her powerful words still spur scores of writers, thinkers and activists around the world to keep breaking the silence.

shaping feminism | criticized "second-wave" feminism's inattention to race and class and was a central voice in developing intersectional feminism ~ a theory + practice that accounts for differences around age, race, class and sexuality

combating oppression + intolerance | expressed her outrage through speeches + writing and was an active social justice warrior, speaking against sexism, racism and homophobia all over the world

1980 | co-founded with Barbara Smith, Kitchen Table: Women of Color Press, the first U.S. feminist press created by and for women of color

nurse's aid, factory worker + librarian | one of the most influential voices in liberation movements + feminism

transforming silence into language and action

working together against oppression while acknowledging differences around age, race, class + sexuality 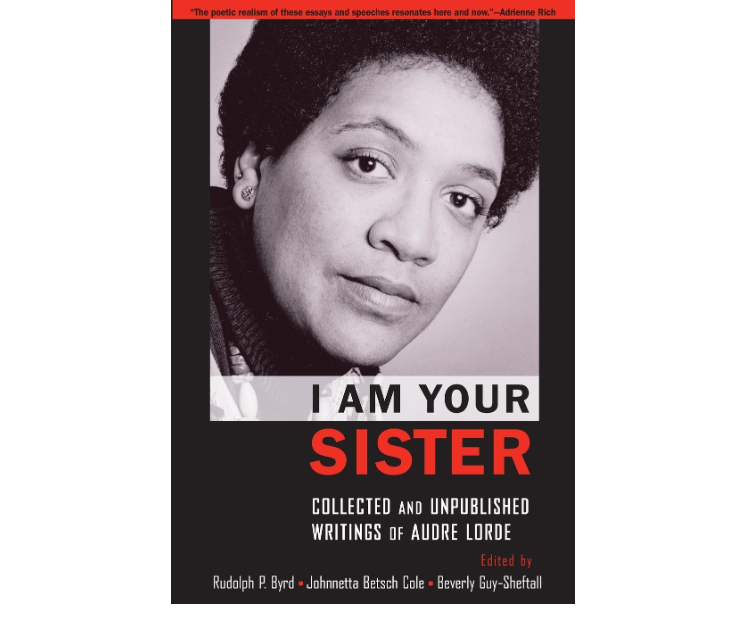 I Am Your Sister: Collected and Unpublished Writings of Audre Lorde 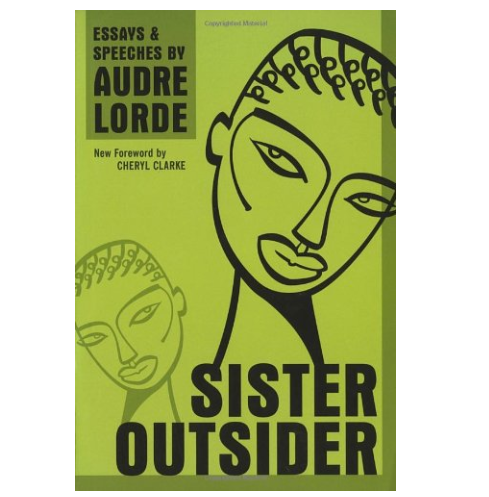 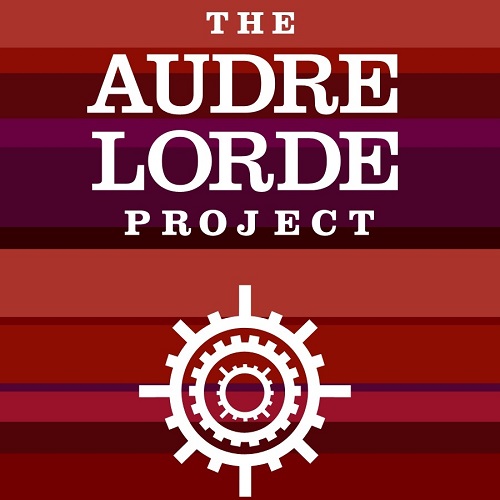 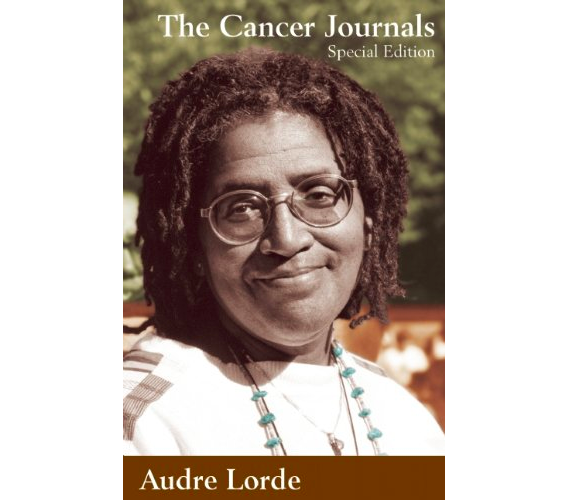 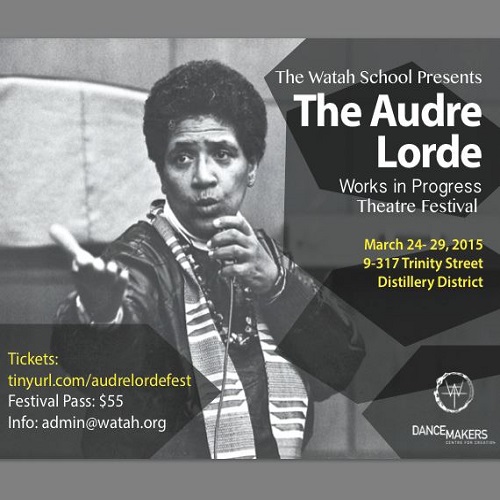 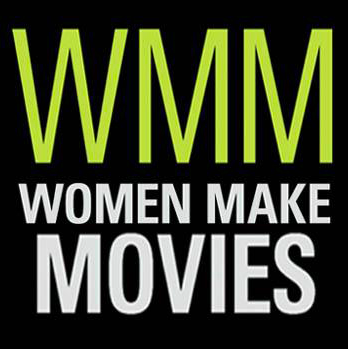 Film: The Edge of Each Other's Battles: The Vision of Audre Lorde 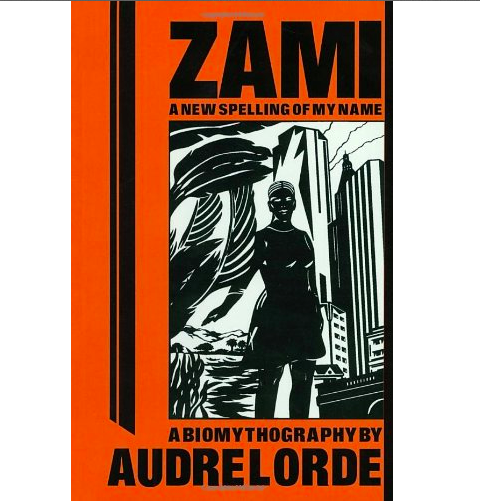 Zami: A New Spelling of My Name - A Biomythography 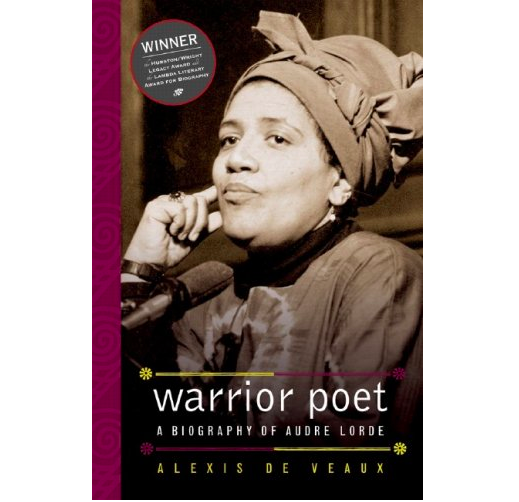 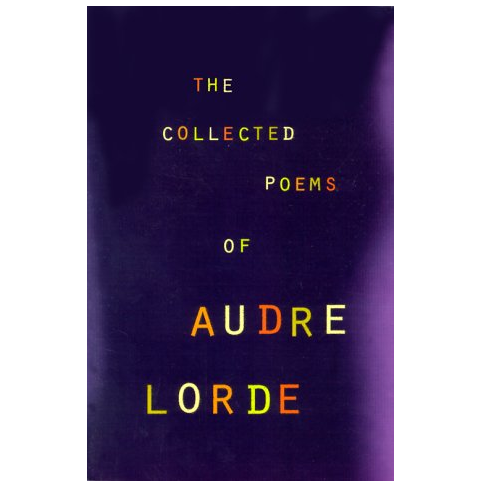 The Collected Poems of Audre Lorde

all quotes by Audre Lorde (25)

"I am deliberate and afraid of nothing."

"Poetry is not a luxury. It is a vital necessity of our existence."

"I have come to believe over and over again that what is most important to me must be spoken, made verbal and shared, even at the risk of having it bruised or misunderstood."

"What I most regretted were my silences. Of what had I ever been afraid?"

"My silences had not protected me. Your silence will not protect you."

"It is not difference which immobilizes us, but silence. And there are so many silences to be broken."

"Only by learning to live in harmony with your contradictions can you keep it all afloat."

"The love expressed between women is particular and powerful."

"I give the most strength to my children by being willing to look within myself, and by being honest with them about what I find there."

"Without community there is no liberation…but community must not mean a shedding of our differences."

"Divide and conquer must become define and empower."

"Prosthesis offers the empty comfort of ‘Nobody will know the difference.’ But it is that very difference which I wish to affirm, because I have lived it, and survived it, and wish to share that strength with other women."

"I do not have to win in order to know my dreams are valid, I only have to believe in a process of which I am a part."

"When I dare to be powerful, to use my strength in the service of my vision, then it becomes less important whether or not I am unafraid."

"Wherever the bird with no feet flew, she found trees with no limbs."

"Revolution is not a one-time event."

"There is no such thing as a single-issue struggle because we do not lead single-issue lives…Our struggles are particular, but we are not alone."

"If our history has taught us anything, it is that action for change directed against the external conditions of our oppressions is not enough. In order to be whole, we must recognize the despair oppression plants within each of us."

"Change is the immediate responsibility of each of us, wherever and however we are standing, in whatever arena we choose."

"We must recognize and nurture the creative parts of each other without always understanding what will be created."

"No matter how difficult it may be to look at the realities of our lives, it is there that we will find the strength to change them."

"Caring for myself is not self-indulgence, it is self-preservation, and that is an act of political warfare."

"We do not need to become each other in order to work together."

Commencement Address: Oberlin College {as reprinted in I am Your Sister} | may 1989

"American women of whatever color cannot afford to indulge ourselves in the parochial attitudes that often blind us to the rest of the world."

for further reading about Audre Lorde: 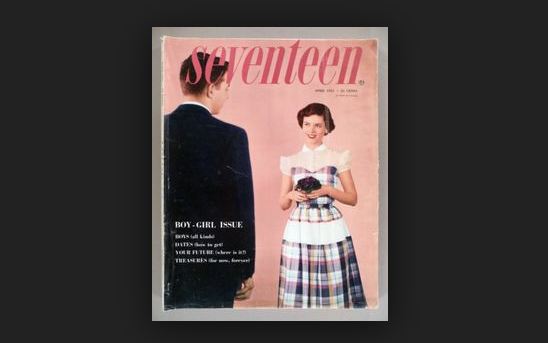 Audre wrote furiously throughout her teenage years and was editor of the school newspaper at Hunter College High School. 1951 was a big year for Audre. She moved away from home after graduation and became self-supporting as a nurse's aide at Bellevue Hospital. Her first published poem ~ a love poem ~ appeared in Seventeen magazine when she was 17 herself! That same year, she met Langston Hughes through meetings of the Harlem Writers' Guild. Later she joked that she made more money from that one early publication in Seventeen than she made for the next 10 years! 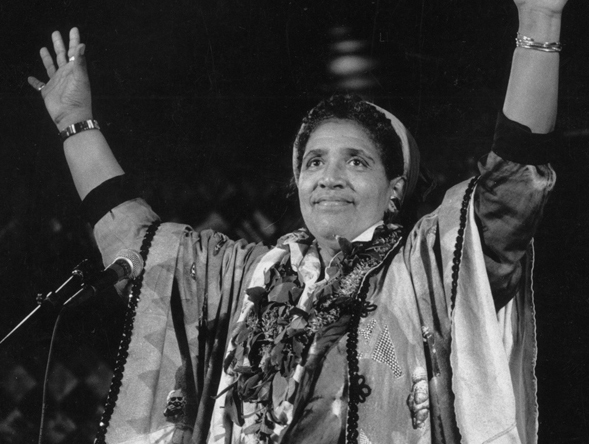 "The Edge of Each Others Battles: The Vision of Audre Lorde"

In 1979, Audre was a featured speaker at the first National March for Gay and Lesbian Liberation in Washington, D.C. A major part of Audre's legacy involves her powerful public speaking, which is featured in this documentary by Jennifer Abod. 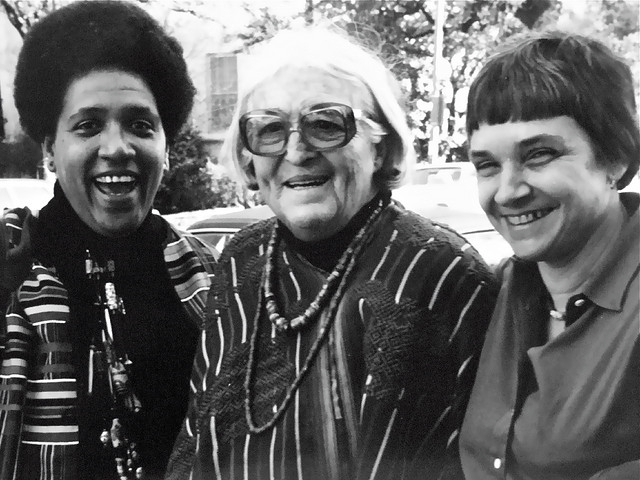 These three poetic powerhouses ~ Audre Lorde, Meridel Lesueur, Adrienne Rich ~ taught a writer's workshop together in Austin, Texas. In 1974, Audre was a National Book Award nominee for poetry, which Rich ended up winning. Rich read a statement prepared with Audre and fellow nominee Alice Walker, accepting the prize on behalf of all "unheard women." Rich's deep and wide-ranging interview with Audre from 1979 can be read in the volume Conversations with Audre Lorde (University Press of Mississippi, 2004). 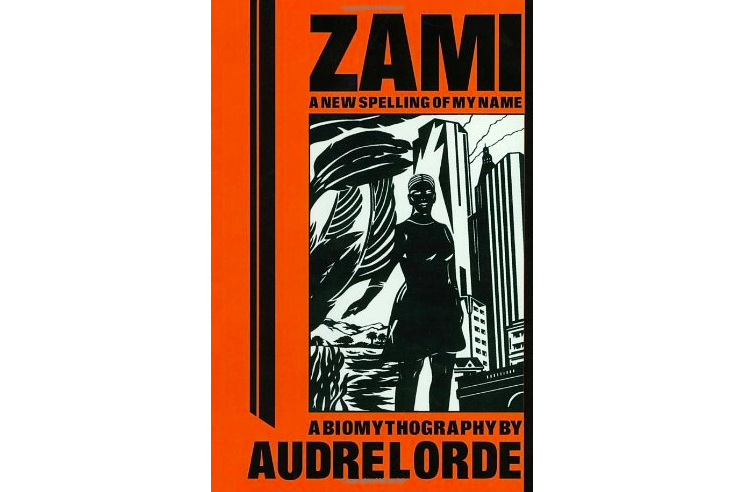 Zami: A New Spelling of My Name - A Biomythography

Audre's autobiographical work combines elements of myth, memory, history, and biography in a beautifully absorbing form. "Zami" is a Caribbean Carriacou name for "women who work together as friends and lovers." 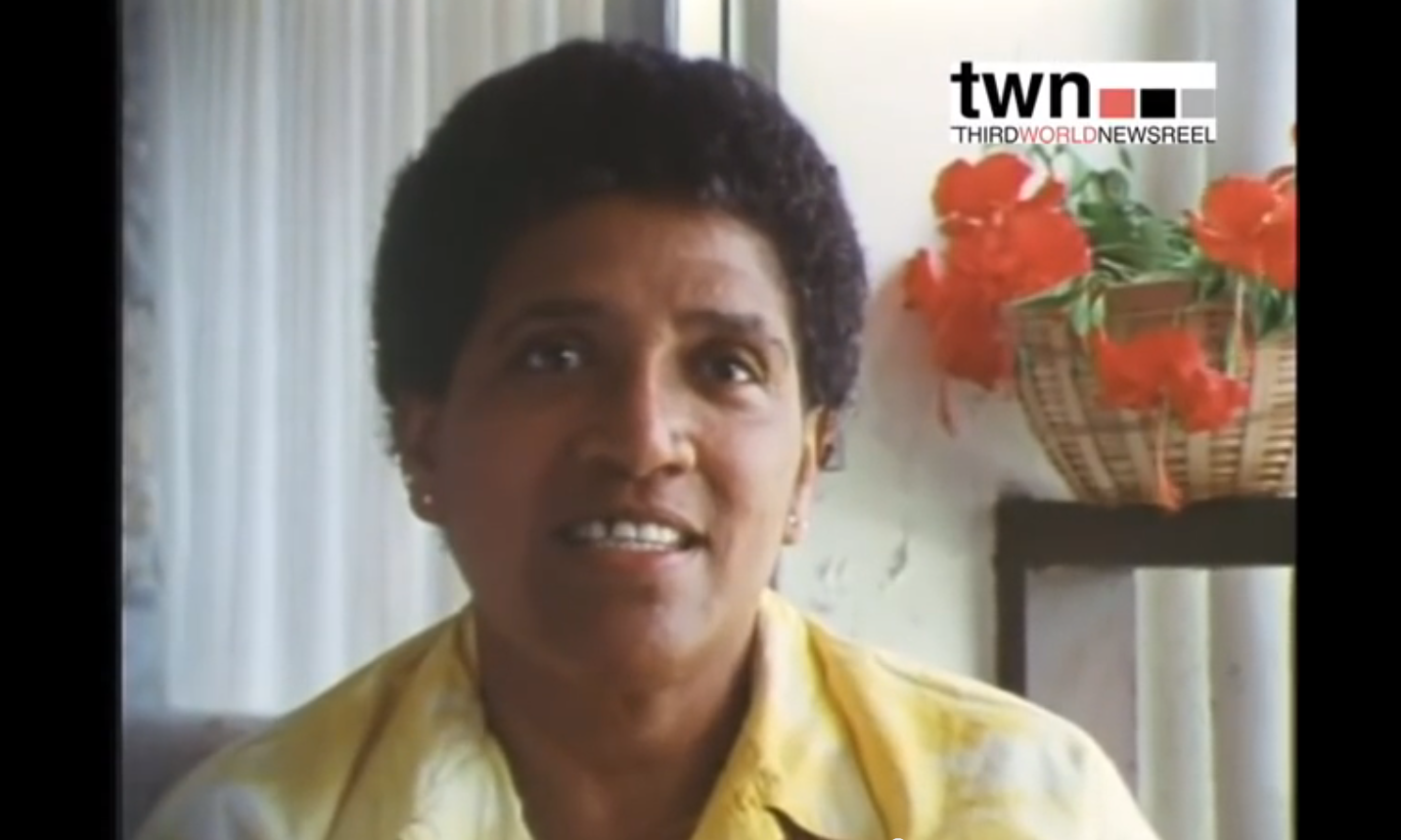 A Litany For Survival: the Life and Work of Audre Lorde - Trailer - TWN

In 1987 on St. Croix, a place that was dear to her and where she later passed away, Audre took the African name Gambda Adisa, which means “Warrior: She Who Makes Her Meaning Known.” Several films have been made about Audre, but A Litany For Survival by Ada Gay Griffin and Michelle Parkerson sheds light on a huge trajectory of Audre's literary and activist work, and features numerous interviews with Audre from various stages of her life and career.