Audrey Hepburn has become synonymous with style + elegance, but her life and humanitarian work show that her characteristic grace was more than skin-deep. After a childhood spent in Nazi-occupied Holland, the British beauty emerged as a Hollywood starlet. Audrey's acting displayed a rare charm and depth ~ capturing the coveted EGOT {winning an Emmy, Grammy, 2 Academy Awards and 2 Tonys}.

She was a film + style icon whose image as Holly Golightly in Breakfast at Tiffany’s forever defined the little black dress. And, she was also an advocate for children, becoming a passionate goodwill ambassador for UNICEF. Audrey was a star who set an example that few Hollywood ingénues have since matched.

1953 | appeared in her first film ~ Roman Holiday ~ in role of Princess Anne + won a Best Actress Oscar for the part, ensuring a Hollywood legacy

1961 | in the famous opening scene of Breakfast at Tiffany’s, she gazed inside the department store while wearing the now-famous Givenchy black dress, oversized sunglasses and dangling pearls, creating the quintessential image of female glamor

married to | partner of | divorced from 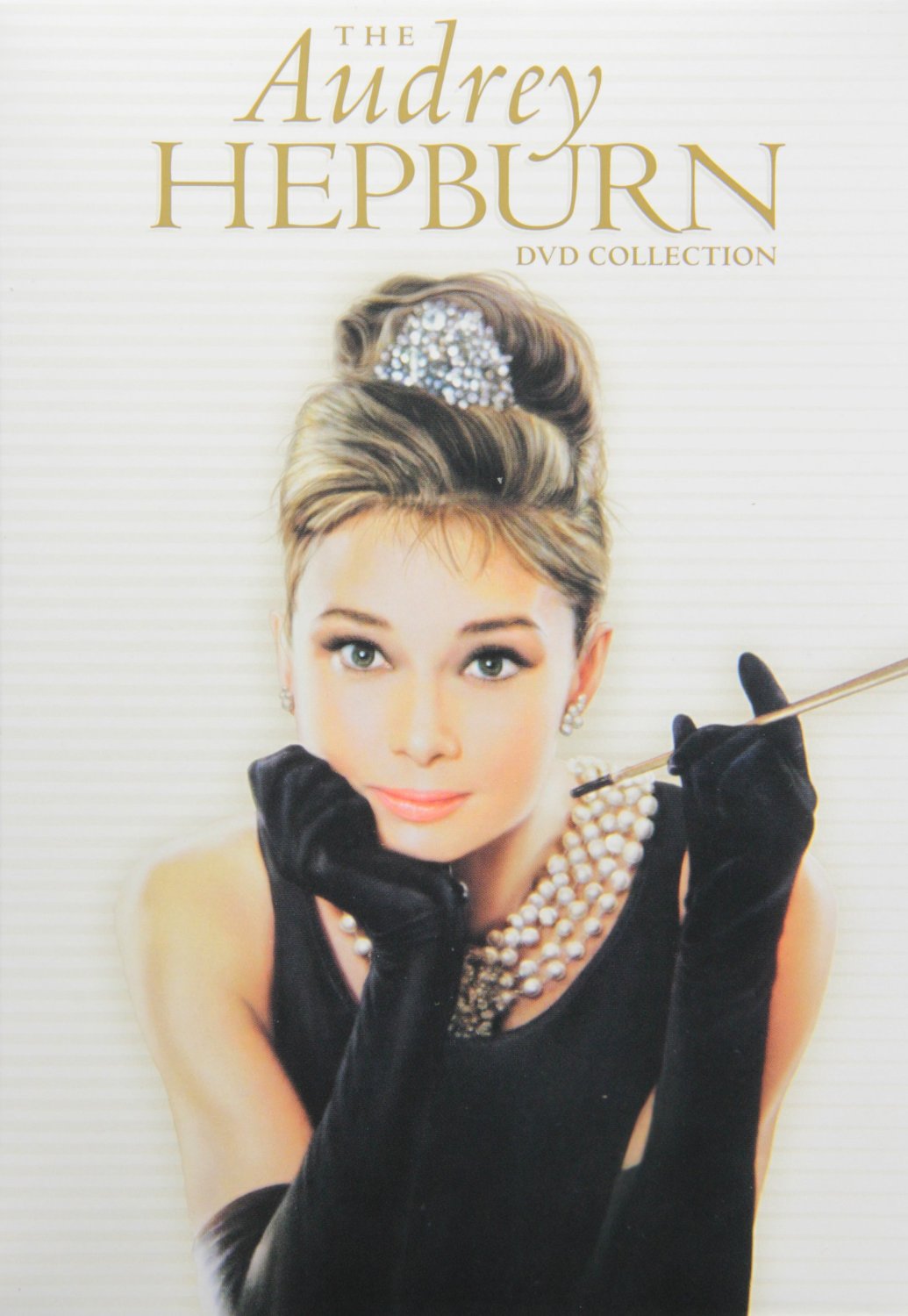 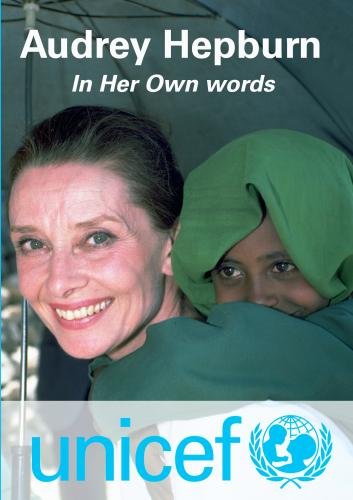 Audrey Hepburn In Her Own Words Documentary 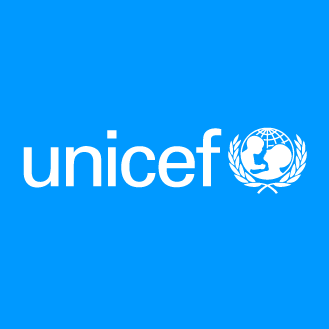 all quotes by Audrey Hepburn (17)

"I have to be alone very often. I'd be quite happy if I spent from Saturday night until Monday morning alone in my apartment. That's how I refuel."

"Success is like reaching an important birthday and finding out you're exactly the same."

on the opening night of Ondine | february 1954

"I did make an effort. But my looks are therefore attainable ... because they can look like Audrey Hepburn if they want to, by cutting off their hair, by buying the large glasses, by having the little sleeveless dresses."

"I created a look in order to make something of myself."

"I have seen, in my travels to all these regions, but one glaring truth: These are not natural disasters but man-made tragedies for which there is only one man-made solution—peace."

"There is no deficit in human resources—the deficit is in human will."

"How is it that governments spend so much on warfare and bypass the needs of their children, their greatest capital, their only hope for peace?"

"I’m glad I’ve got a name because I’m using it for what it’s worth."

"To save a child is a blessing: to save a million is a God-given opportunity."

award ceremony for the Presidential Medal of Freedom | 1991

"I myself was born with an enormous need for affection and a terrible need to give it. That's what I'd like to think maybe has been the appeal."

"I love people who make me laugh. I honestly think it’s the thing I like most, to laugh."

"I've been asked about so-called 'compassion fatigue.' What I would like to say to that is, that it's nonexistent."

A Visit of Compassion to Somalia | october 1992

"Others come first. You come second. This was the whole ethic by which I was brought up."

Envoy for the Starving | october 1992

"The human obligation is to help children who are suffering. The rest is luxury."

Envoy for the Starving | october 1992

"Is there anything more important than a child?"

for further reading about Audrey Hepburn: 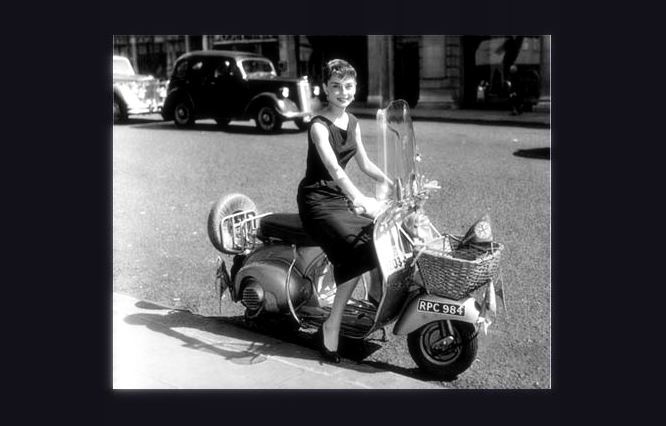 After being discovered by a Broadway casting director in Monte Carlo in 1951, Audrey starred in her first Hollywood blockbuster when she was cast {over Elizabeth Taylor} opposite Gregory Peck as the charming escaped royal Princess Anne in Roman Holiday. 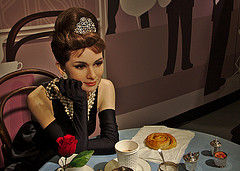 While Truman Capote wanted Marilyn Monroe cast as the glamorous, free-spirited social climber Holly Golightly for the Hollywood adaptation of his hit novel Breakfast at Tiffany's, Paramount opted for Audrey. She made the film into pure movie magic ~ giving not only one of her more memorable performances but one of the most memorable performances of all time. 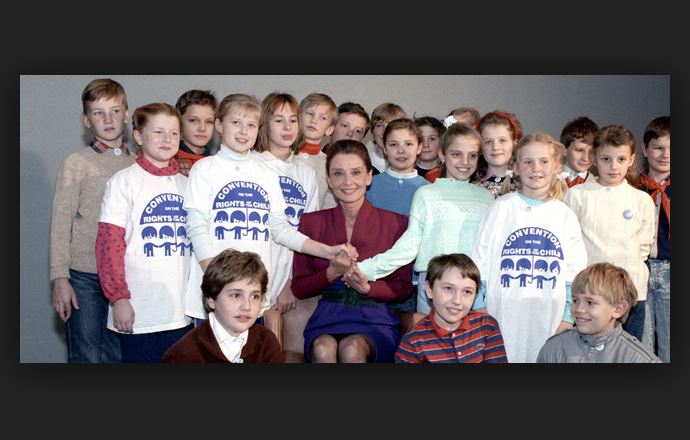 Audrey worked with UNICEF and the United Nations to fight for children's rights ~ a cause especially close to her heart since she was a recipient of life-saving aid as a child. Here, she sits with children from the 1989 conference at which the Convention on the Rights of the Child was adopted by the UN General Assembly. 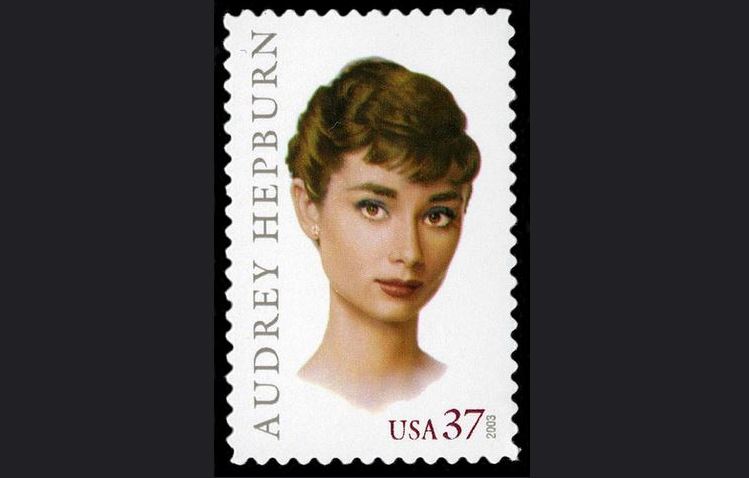 The US Postal Service featured Audrey as the 9th in their series of commemorative stamps honoring Tinseltown greats.