It only took 3 minutes + 57 seconds for 28-year-old Dr. Joyce Brothers to become a household name. That’s how long it took the young psychologist to draw upon her surprising knowledge of boxing to win the $64,000 Question. From quiz shows to sports + talk shows to her own NBC program, Joyce quickly became a household name not just for her trivia genius but also her pioneering advice ~ particularly to women. Often, she dealt on topics never before discussed publicly, like sex and menopause. Drawing upon her experiences as a wife and mother as much as on her degrees, Joyce offered keen insight on women’s issues while seeming nonthreatening to the status quo. And, did so with a great sense of humor, racking up 100s of late-night appearances not to mention tv + film cameos.

dispensing advice | brought discussions about love, self-worth and intimacy out in the open in an era when such topics simply weren't discussed in public

1955 | competed on the television show "The $64,000 Question" as a way to support her young family while her husband had a $50-per-month income as a medical resident
~ Joyce became only the second person {first woman} to win the top prize...thanks to her encyclopedic knowledge of boxing ~

1958 | launched The Dr. Joyce Brothers Show, an afternoon talk show that ran until 1963

1989 | shaken by the enormous grief of losing her husband to cancer, decided to share her experience and perspectives to help others cope with loss in her book Widowed

~ remained at home to raise Lisa according to her own beliefs about child rearing...but stopped when she felt experimenting on her own child was “unnatural and unnerving.”{1} ~

depression awareness
~ twice prevented suicides on air during her shows ~

women's rights
~ she spoke up about bias in textbooks ~

~ head of the psychology department at Columbia asked her to give up her place, as she was standing in the way of a man, who would have a better career ~ 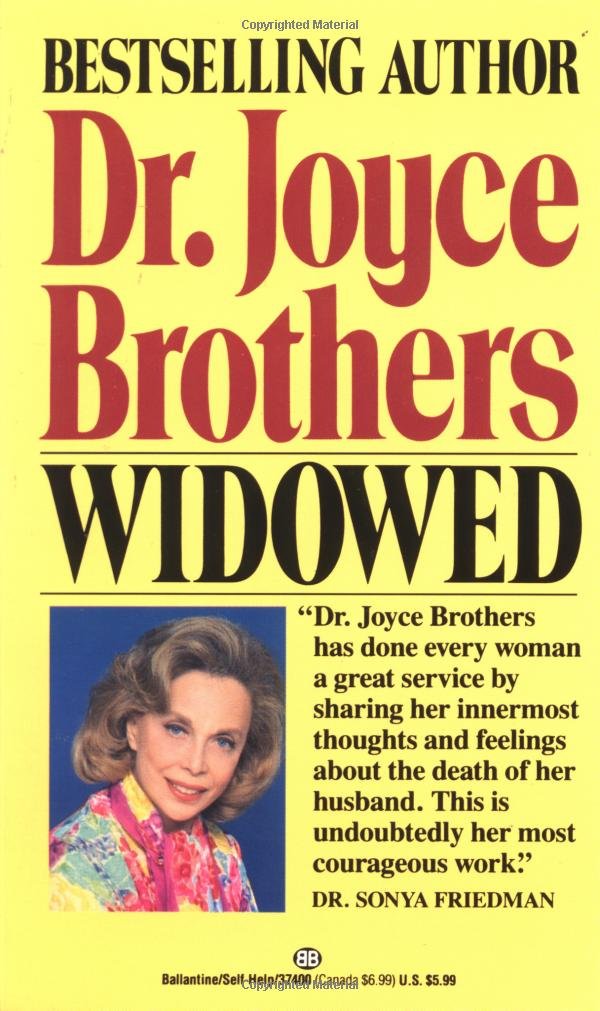 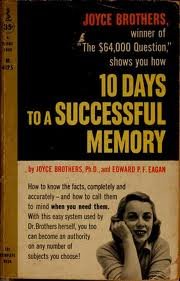 10 days to a successful memory

all quotes by Joyce Brothers (40)

"Marriage is not just spiritual communion and passionate embraces; marriage is also three meals a day, sharing the workload and remembering to carry out the trash."

When Your Husband's Affection Cools | may 1972

"Divorce? Never! Murder? All the time!"

"Even in this age of television, we live in a world of the written word."

"Listening, not imitation, may be the sincerest form of flattery."

How to get Whatever You Want out of Life | february 1978

"Today, society's rules may have changed, but the behavior of many men often has not."

"Remember, confession, confiding, and sharing are good for the body as well as the soul."

Success May Not Bring Happiness | october 1987

"Psychologically, having it all is not even a valid concept."

"I have found that, as love matures, it grows better, warmer, deeper—not quite as passionate perhaps, but that's good, because otherwise we'd wear ourselves out."

"If you would love successfully, you must also love patiently."

"To keep love alive, one doesn’t need to work at it but to play."

"Cholesterol, I told myself, is what God put in food to make it taste good."

"Becoming a widow is a change of the first magnitude, and it shakes your whole life to its very foundations."

"What it boiled down to was that I wanted a man in my life, but not in my house."

"While a daughter always remains Daddy’s little girl, she grows up to be her mother’s peer."

"Time does not heal grief."

"No matter what your age, you can develop sex appeal."

"What makes a woman attractive at 40 differs from what makes a girl stunning in her teens."

"No woman should feel unworthy and unhappy because she doesn’t look like Michelle Pfeiffer."

"The person who cannot feel joy by looking at a sunset or the shimmering trees blowing in the wind, has a problem."

"Humans are not happy living in a totally stress-free environment."

"It defies common sense to think that psychologists can't deal with their own relationships."

"I had never really experienced grief before, and although the pain was enormous, I became much more sensitive to others."

"I had enough to promise myself I’d never do things I didn’t want to do again."

"When things don't go well I find another route."

"I use work as my way of dealing with blues."

"I take intelligent risks. At my stage of life, what can they do to me? Really?"

"Control isn’t really about doing it all. It’s about being focused on what you want and pursuing your major goals—not every goal."

"You need to give yourself permission to be human."

"We didn’t design the seas, so we can’t control the currents."

"Ideally, this is a joint decision by both partners, but until men can actually give birth to a baby after carrying it for nine months, I think the woman must have the deciding vote."

"Cherish everything in your day that contributes to happiness: spending a special moment with a child, drinking a cup of your favorite coffee, joking with a co-worker, saving a rosebush from destruction. Happiness hides in life's small details. If you're not looking, it becomes invisible."

"Most of us don't make happiness a priority."

"Nothing brings families together faster than forgiveness."

Reconnect With Your Family | november 2001

"When you forgive, you gain strength and come out a winner. You break free of control by the other person's actions."

Reconnect With Your Family | november 2001

"Small problems provide a chance to grow; large ones are a lesson in courage."

"Strong families use the word 'we' a lot, but 'I' is never forgotten."

"I want to do everything that I can, 'cause it's fun."

"You can't please everyone, but you can learn who you shouldn't waste any more time worrying about!"

for further reading about Joyce Brothers: 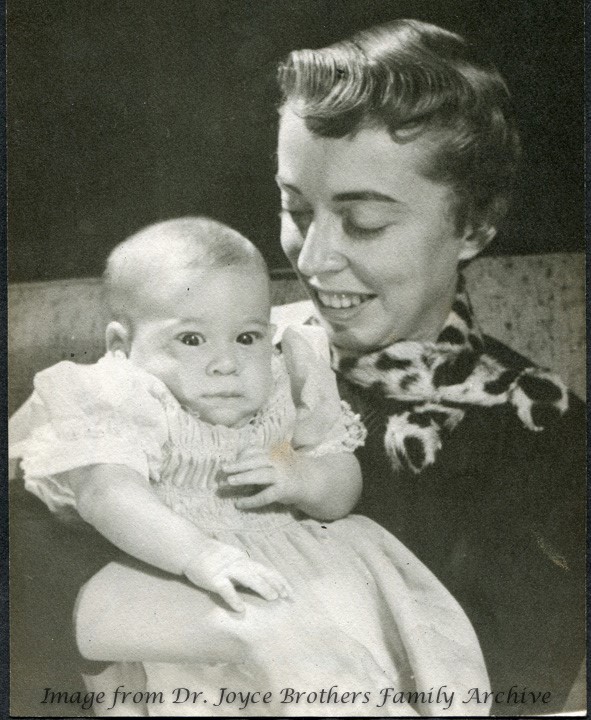 Joyce with her only child, Lisa. Although she fought for her place in graduate school ~ the head of the psychology department at Columbia asked her to give up her place in their master's program because she was standing in the way of a man, who wouldn't quit work to have babies ~ Joyce did stop working to stay home with her daughter. 2 years later, she was on The $64,000 Question, and her subsequent career could hardly be said to be less successful than any man's.

The then-popular tv game show, the $64,000 Question made joyce a household name when she was only the second person, and first female to win the game. 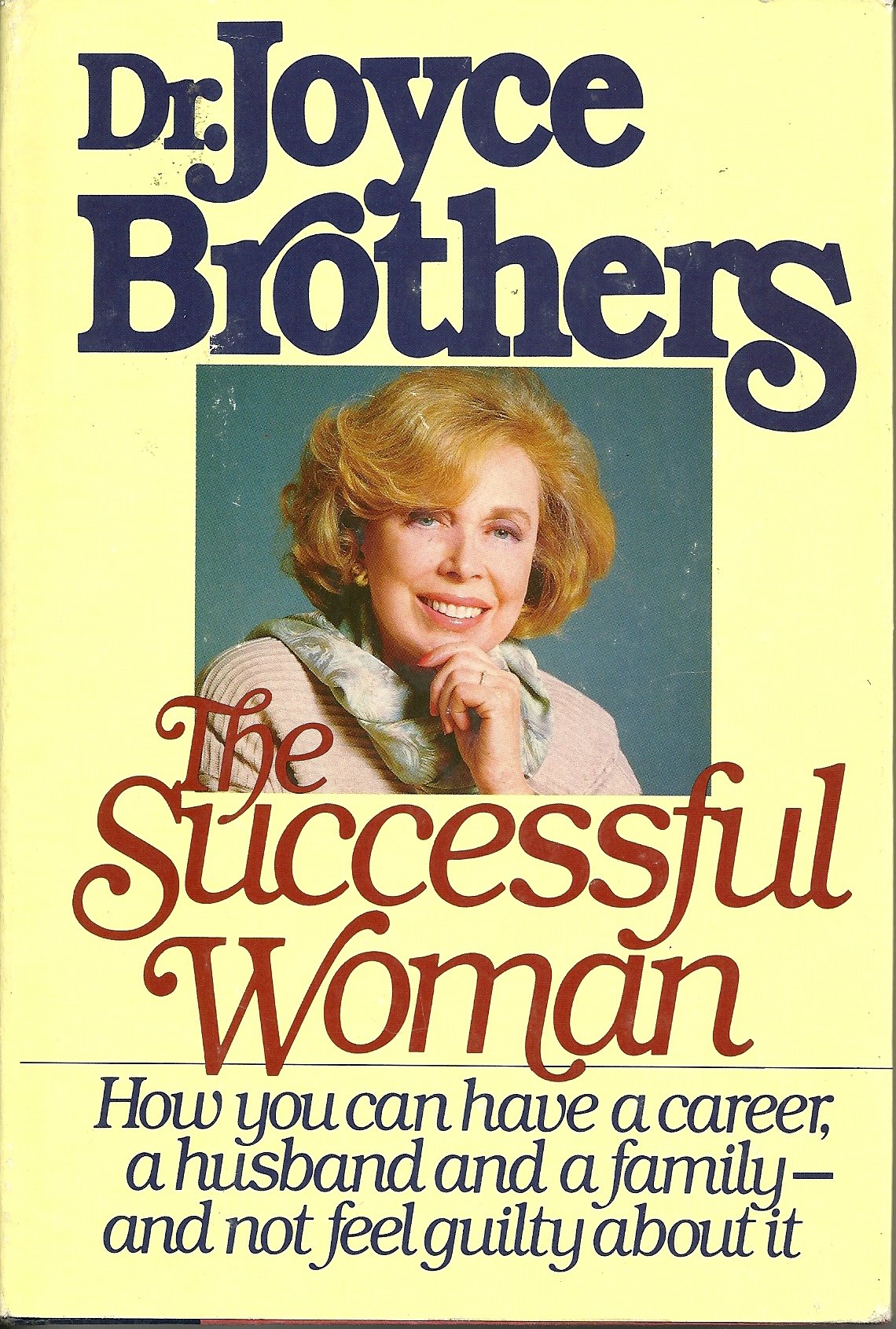 book | The Successful Woman: How you can have a career, a husband, and a family—and not feel guilty

A champion for working mothers. Joyce faced intense pressure as a graduate student ~ the head of the psychology department at Columbia asked her to give up her place in their master's program because she was standing in the way of a man, who wouldn't quit work to have babies ~ and did stop working to stay home with her young daughter. But 2 years later, she was on The $64,000 Question, and her subsequent career could hardly be said to be less successful than any man's.

Joyce was surprised to find—despite her decades of training and experience—she was unable to cope with the death of Milton, her husband of 39 years. Her book Widowed details her ongoing grief process, and as she told Psychology Today it made her own pain "not only bearable but worthwhile."