Eleanor Roosevelt was a New York society girl. A shy kid. An orphan. But, curiosity propelled her out of a sheltered childhood into global recognition as a leading lady of 20th century.

As the wife of President Franklin Delano Roosevelt, Eleanor redefined the role of first lady from polite, fashionable hostess to vocal advocate for social issues. She served in the White House during some of the most pivotal moments in US history ~ The Great Depression and WWII ~ using her post as a platform to champion women's, workers' and civil rights.

Upon leaving the White House, she was appointed as a delegate to the newly formed United Nations where she chaired the commission that penned its foundational Declaration of Human Rights. One of the most quoted women of all time, this influential leader + prolific writer never retired from her good work. For her tireless efforts to create peace and understanding among all peoples, Eleanor was affectionately dubbed, "First Lady to the World."

inspiring citizens | through more than 8,000 columns, 580 articles, 27 books + 10,000 letters {captured by the National Endowment for the Humanities in The Eleanor Roosevelt Papers Project}

1935 | began writing her signature syndicated column, "My Day," which ran until her death in 1962

"First Lady to the World"

Franklin Delano Roosevelt
~ politician who served as the Governor of New York + US President ~
~ married on March 17, 1905 {they had a complicated relationship}

The New Deal and Democratic politics 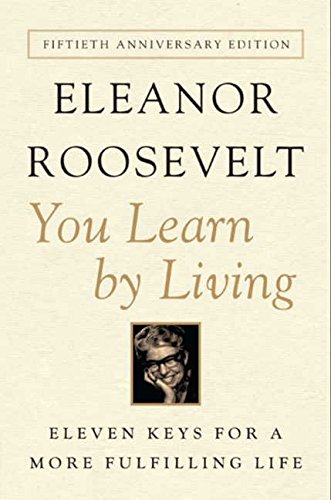 Eleanor's keys for a fulfilling life 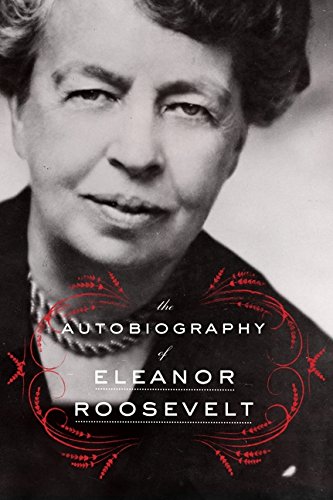 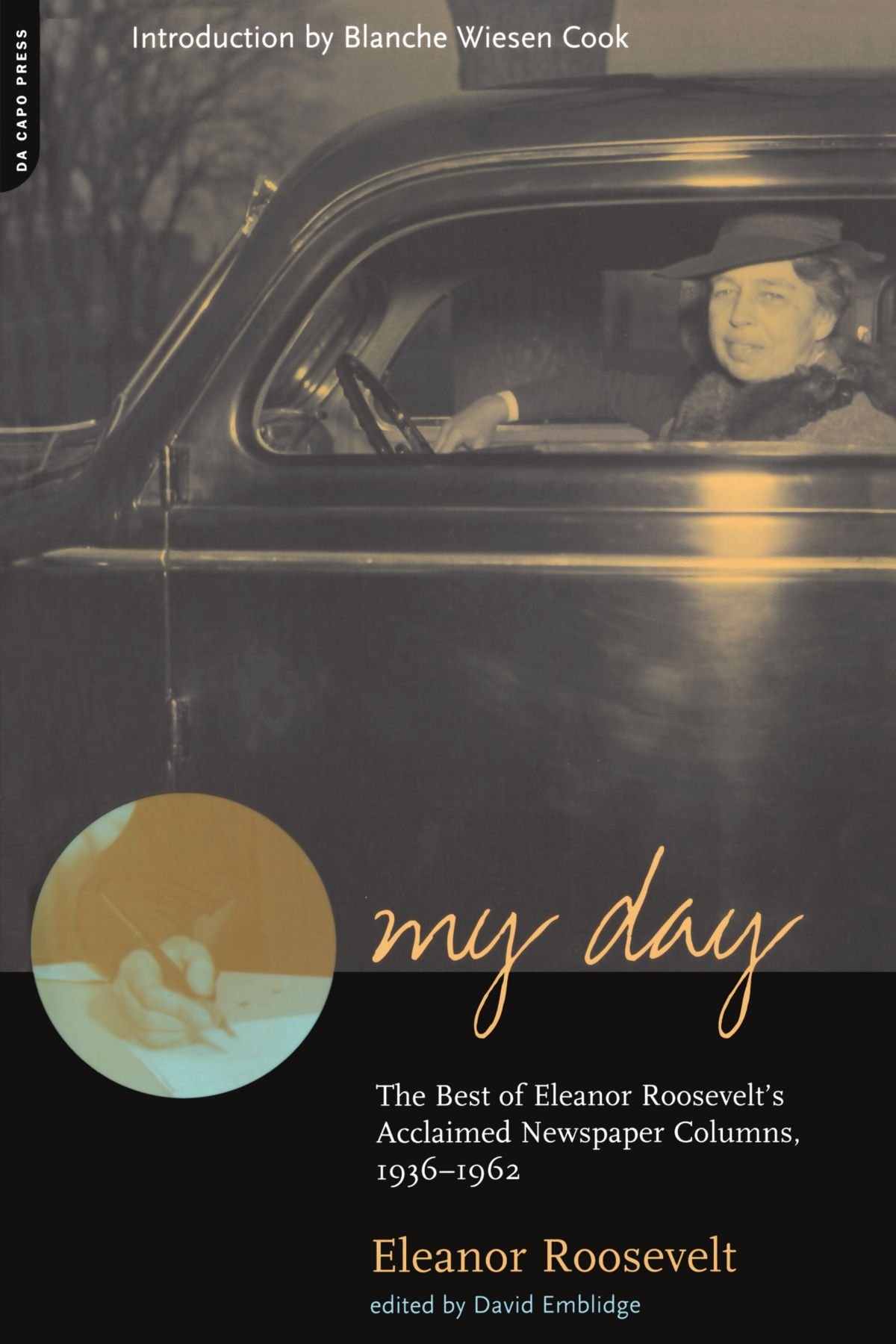 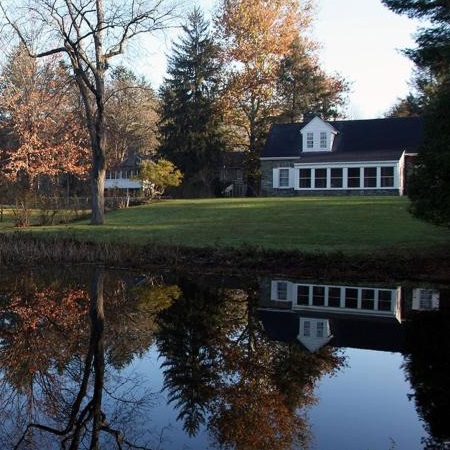 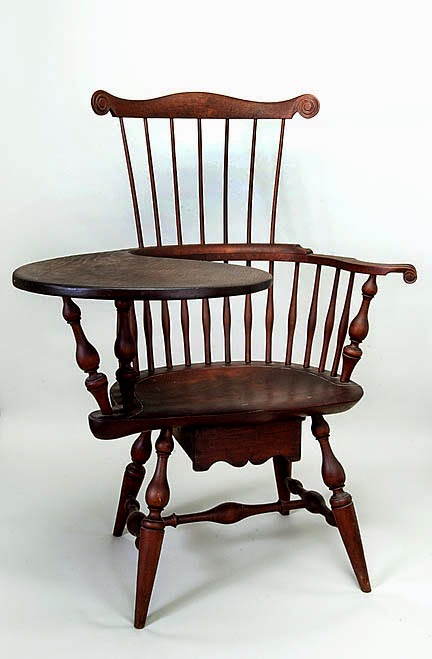 all quotes by Eleanor Roosevelt (28)

"As I grow older I realize that the only pleasure I have in anything is to share it with someone else."

"Memorial Day should never be given up, but as the years go by we hope that people will be honored for their lives and not for their deaths."

"I wish that we could use Decoration Day {Memorial Day} throughout this country, not only as a patriotic celebration to honor the deeds of the past, but as a day on which we remind our young people of their obligation to the future. On them lies the necessity to change the thinking of the future so that we will prevent graves all over the world."

"You who are going to build a new world must go forward with courage."

"No one can make you feel inferior without your consent."

"On this Thanksgiving Day, my wish for all of you...is that life may give you a chance to be grateful for what you receive because you love the giver, and that you may have the joy of giving of yourself to those whom you may love."

"I can easily forgive my enemies for I so greatly value my friends."

"I am grateful for health and strength, the love of family and friends, for the power to enjoy so many things."

"I know that we will be the sufferers if we let great wrongs occur without exerting ourselves to correct them."

"The important thing is neither your nationality nor the religion you professed, but how your faith translated itself in your life."

"Memorial Day . . . should be a day of consecration to the fulfillment of those things for which our men died."

"Remembrance of our boys is not the really great significance of Memorial Day. If the great sacrifices of youth are to bear fruit, this day must remind us primarily of our duty to the living. It should be a day of consecration to the fulfillment of those things for which our men died."

"A woman will always have to be better than a man in any job she undertakes."

"When will our consciences grow so tender that we will act to prevent human misery rather than avenge it?"

"In numbers there is strength, and we in America must help the women of the world."

"I cannot believe that war is the best solution. No one won the last war, and no one will win the next war."

"Whatever else Memorial Day may be, it is a day for thought, for remembering those who have loved their country and loved its people. What they loved was the life that they lived, and perhaps we can remember them best in promoting and preserving life and the standards which they held and craved for all future citizens."

"The sooner we begin to understand that nowhere in the world can we escape the results of conditions anywhere else in the world—the sooner will we be bringing about a time when Thanksgiving Day will be a day of world celebration."

"It is good, I think, to have one day on which to count our blessings and to rejoice in the good things that have come to our land and to us as citizens of this land."

"It is the living that we do that still matters and will matter in what we make of our country."

"You gain strength, courage, and confidence by every experience in which you really stop to look fear in the face."

"You must do the thing you think you cannot do."

"When you cease to make a contribution you begin to die."

"You will feel that you are no longer clothing yourself, you are dressing a public monument."

"Life was meant to be lived, and curiosity must be kept alive. One must never, for whatever reason, turn his back on life."

"We make our own history. The course of history is directed by the choices we make and our choices grow out of the ideas, the beliefs, the values, the dreams of the people."

"I think, at a child's birth, if a mother could ask a fairy godmother to endow it with the most useful gift, that gift would be curiosity."

for further reading about Eleanor Roosevelt: 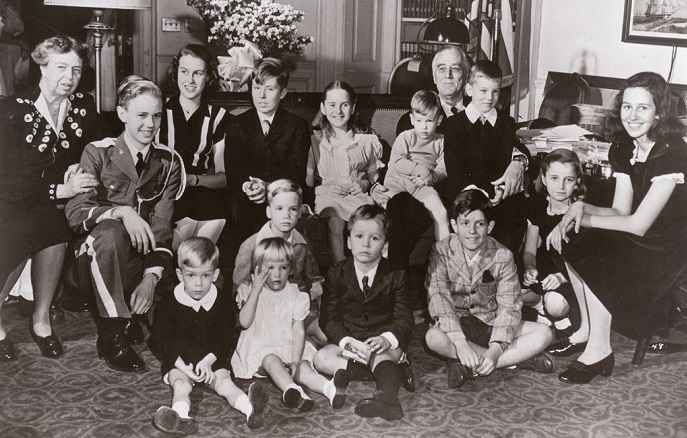 Eleanor went from first lady of New York to first lady of the US in 1933, a position she held for 12 years. The Roosevelts had one of the largest first families today ~ with 6 children + 29 grandchildren. Here, the next generation gathers with their grandparent in the Oval Office. 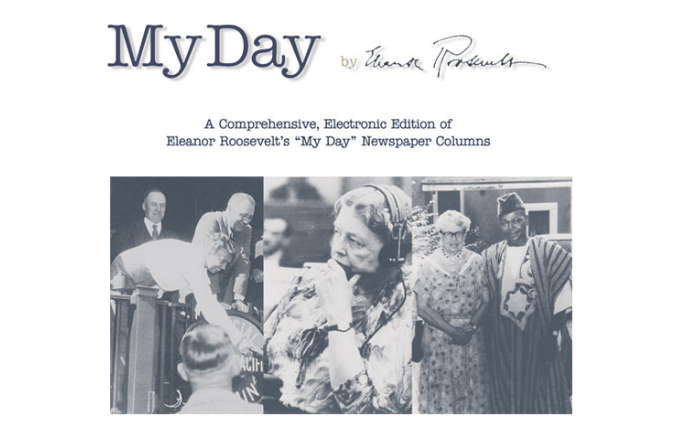 My Day by Eleanor Roosevelt

Starting in 1936, Eleanor wrote a popular newspaper column to share her personal insights about the current events + social issues of the day with the public. Never one to shy away from controversial topics, Eleanor spoke with her characteristic wit, insight + compassion about everything from women's rights to racial discrimination to post-WWII reconciliation. Her influential editorials ran 6 days a week all the way up until the year of her death in 1962. 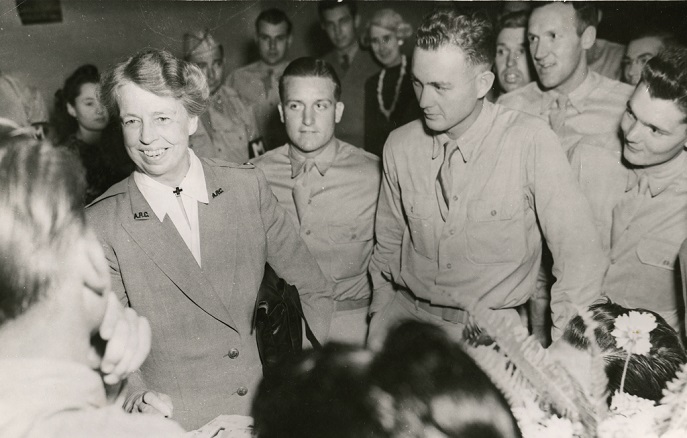 Eleanor served as the first lady of the US during the nation's toughest period in the 20th century ~ including the Great Depression + World War II. Here, she visits with troops in the South Pacific in 1943. 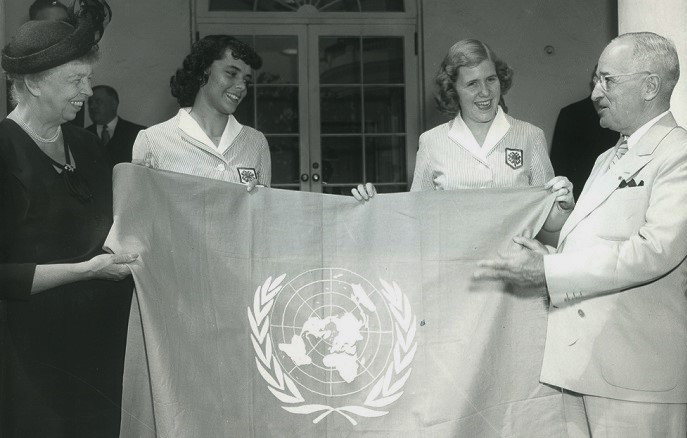 The US's longest serving first lady was an early advocate for the United Nations + became one of its very first delegates in 1945. As chair of the UN's Human Rights Commission, she oversaw the creation of the organization's foundation document, the Declaration of Human Rights. Having served as first lady throughout WWII, Eleanor was a keen advocate for world peace who frequently asked US citizens to recognize their responsibility to the global community.