Among the funniest women in the world today, Tina Fey is a triple threat: writer, actor + mother. A improv student who has emerged as a smart, dynamic role model, Tina used her work ethic and pure wit to get her to the top of the comedy game.

From the first female head writer at SNL to the second face of Sarah Palin in the 2008 presidential election, from writing one of the most quoted movies in America {Mean Girls} to writing and starring in a primetime Emmy-winning comedy {30 Rock}, Tina has been breaking new ground for women in comedy for the last 15 years. Recently, Tina’s roles include busy mother of 2 adorable daughters and the star of numerous major motion pictures.

smart comedy | TV + movies + commercials + everything she does

Sarah Palin impression | "I can see Russia from my house!"

being a mom | seen alongside her daughters in 30 Rock, commercials + ice bucket challenges

2004 | broke into the movie business with the release of Mean Girls for which she wrote the screenplay and acted as divorced math teacher Ms. Norbury
~ based on Rosalind Wiseman's book Queen Bees and Wannabes ~

spends time with her family 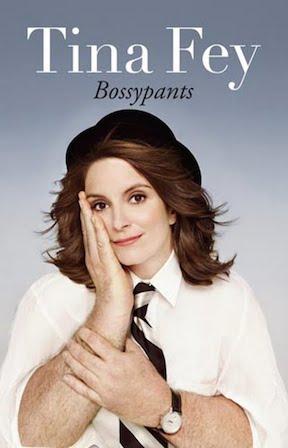 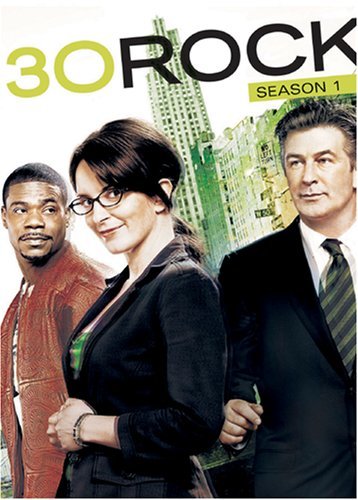 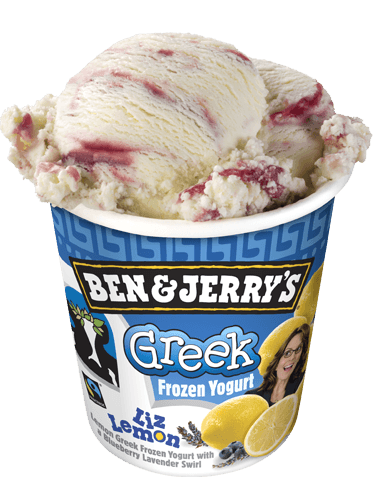 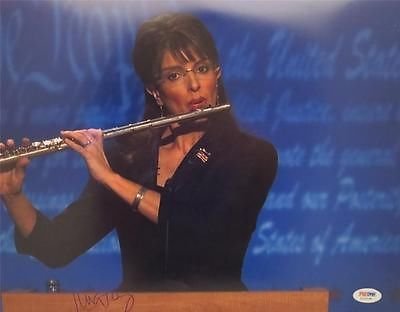 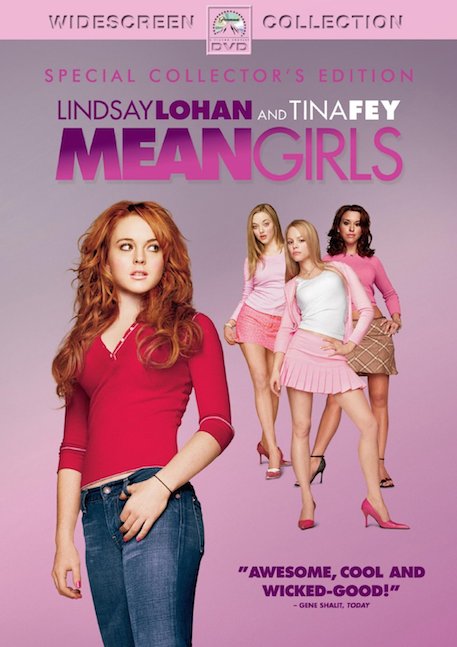 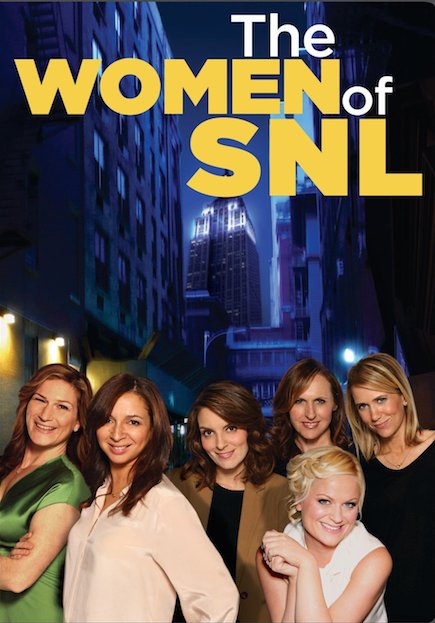 The Women of SNL 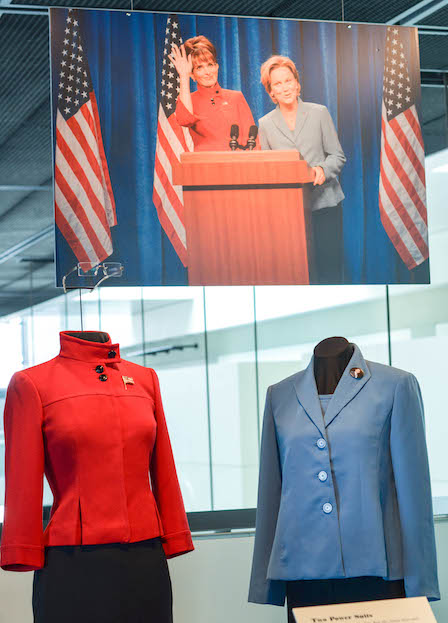 "Say yes, and you'll figure it out afterward."

"I know for sure that you can tell how smart people are by what they laugh at."

"I want to keep creating comedy that is, as my old improv teacher would say, at the top of our intelligence or higher. It's easy to fall into the trap of just cranking out things that are good enough to sell."

"When humor works, it works because it's clarifying what people already feel. It has to come from someplace real."

"Twitter seems like a busman's holiday: just more writing. I have no plans to do it. I'll just stick with my 24/7 webcam. I'm old-fashioned that way."

"Some people say, 'Never let them see you cry.' I say, if you're so mad you could just cry, then cry. It terrifies everyone."

"If you retain nothing else, always remember the most important Rule of Beauty. 'Who cares?'"

"You can't be that kid standing at the top of the waterslide, overthinking it. You have to go down the chute."

"'Blorft' is an adjective I just made up that means 'Completely overwhelmed but proceeding as if everything is fine and reacting to stress with the torpor of a possum.' I have been blorft every day for the past seven years."

"Do your thing and don't care if they like it."

"The idea of being in control for the sake of control is not really important to me. If everyone is sharp and doing what they're doing well, you don't really need to be in control all the time."

"Part of being successful is being a good collaborator—and being smart enough to find the right people to work with."

"Funny is more of a journey. And a desperate attempt."

"Anything that says gala on it, drink contact-lens fluid. Anything to get yourself in the hospital."

Late Show with David Letterman | may 2015

for further reading about Tina Fey:

The Second City in Chicago

After Tina graduated from UVA in 1992, she moved to Chicago ~ the Mecca of improv. In 1994, she was accepted into The Second City, a well-known comedy troupe in Chicago. During that time, Tina worked odd jobs during the day and did improv at night. Her training led to Tina being hired as an SNL writer in 1995 and to a weekend improv show with SNL costar Rachel Dratch from 1999-2000 called Dratch & Fey, which eventually inspired SNL creator Lorne Michaels to cast her in Weekend Update.

Tina Fey became the first head female writer for SNL in 1999. The reign of SNL's boys' club was finally broken. 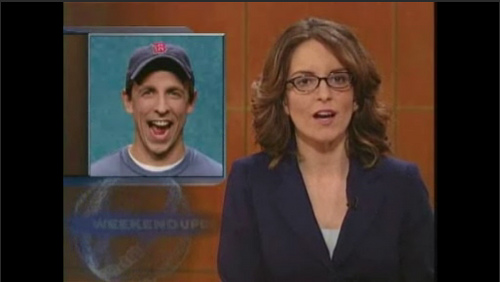 Tina went from SNL writer to costar of Weekend Update alongside Jimmy Fallon. In 2004, Jimmy was replaced by Amy Poehler, creating the first 2-woman anchor team in SNL history. "We also want to be the first two ladies to fake news on a rocket," Tina told the New York Times, adding ~ "And the first fake news while eating the most hot dogs of any people ever to eat hot dogs." 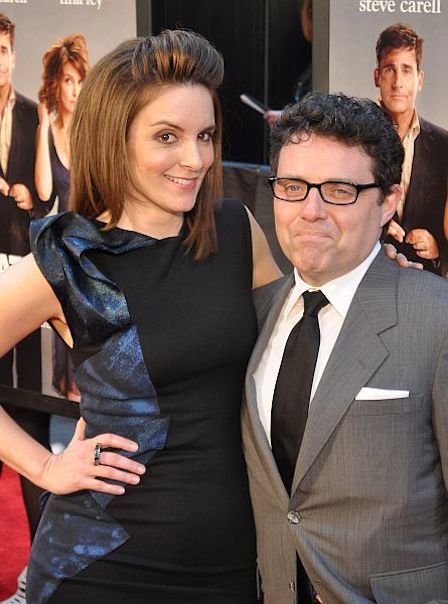 Tina and Jeff met while working at Second City in Chicago in the 1990s. They married in a Greek Orthodox ceremony on June 6, 2001 after 7 years of dating. Years later, the couple is still going strong. Here, the 2 are {appropriately enough} out on a date night for Tina's premiere...

Tina first pitched her idea for 30 Rock while still working as SNL's head writer. No surprise that the premise of her series followed the head writer of a sketch comedy show as she dealt with difficult actors + producers. Her switch from late-night to primetime eventually led to many award nominations and made Tina even more of a household name.

Tina + Amy get ready to host the 70th annual Golden Globe Awards with a sequin-studded advertisement on NBC. People liked the comedic duo so much that they asked them back for the 71st + 72nd awards {the 2 decided to call it quits after 3 years}. 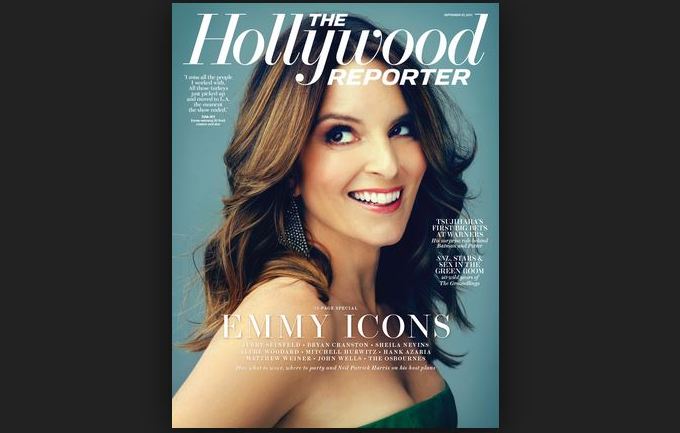 Since 2001, Tina has been nominated for 61 Emmys ~ mostly for her sitcom 30 Rock. Her first win was in 2002 for her writing on SNL. After other wins for her comedy series, acting + Palin impression, Tina won her latest Emmy in 2013 for Outstanding Writing in a Comedy Series ~ 30 Rock.

Tina's youngest daughter ~ Penelope ~ stars alongside her mom in one of her American Express commercials that chronicle the humor in her daily life.